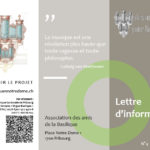 As of today, with three-quarters of the needed amount raised, the decision has been made to sign the letter of commitment to the organ builder. This historic moment took place on Sunday, November 27, 2022, the first Sunday of Advent, in the Treasure Room of the Basilica.
Read more… 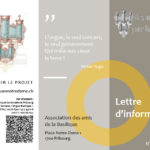 Once upon a time, as the accompanying archive photo can attest, a majestic organ occupied the gallery of the Basilica of Our Lady of Fribourg. Unfortunately, history has made it disappear in a singular way.
Read more… 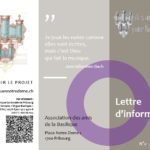 Today, thanks to the support of new “friends” and the new dynamic put in place, the project is progressing favorably. However, the search for funding remains a priority.
Read more… 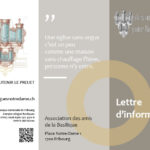 At this stage of the project, the association has managed to raise nearly CHF 650,000, or three-quarters of the budget amounting to CHF 880,000. Unfortunately, without the full amount, it is impossible to take the risk of starting the construction work.
Read more… 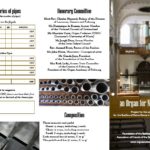 To support our project, you can sponsor one or more of the 2048 pipes of the organs. For an additional fee of 20 francs, donors can have their first names and surnames engraved on the back of the patronized pipes. The names of donors of more than ten thousand francs will appear on a plaque affixed to the organ case.
Read more…

Why a new organ?

The project approved by the Foundation Council of the Notre Dame Basilica, according to the proposal of the Organ Commission, is based on the following criteria:

An instrument adapted to the liturgy, which thus corresponds to the primary vocation of the organ, a liturgical instrument par excellence, but also an instrument in harmony with the history and the architecture of the church. It recalls the instrument of Joseph Anton Mooser, which in its turn was influenced by the organ builders of Alsace at the end of the 18th century. The style of the case is marked by the simplicity and austerity of the late Louis XVI style, the style which inspired the restoration of 1753.

This is a style of organ which would be well placed in the organo-musical landscape of Fribourg, and would add to the diversity of the organs of the city. This project is inspired by the instruments of the builder Johann Andreas Silbermann (1712-1783), the last representative of a long and celebrated line of organ builders, whose instruments are particularly well-suited to the execution of French and German music of the 17th and 18th centuries.

The composition of the organ

The keyboards will have 56 notes from low C to high G, and the pedal will hal 32 notes from low C to G. The whole instrument will be made according to the best practices of historical organ building. The harmonisation of the pipes will be done in collaboration with Jean-Marie Tricoteaux. The temperament will be taken from Silbermann, recently discovered on the positive organ of the Musée des Arts décoratifs in Strasbourg, with the tuning at A=415, common with instruments of the 18th century. The sumptuous sounds of Silbermann can thus be well reconstructed, but in order to avoid the problems with an organ of this type, a continuo organ, with transposable keyboards, will also be commissioned from the builders Frédéric Desmottes in Landete, Spain.

The budget is chf 785’370.- for the organs to which will be added the expenses from the adaptation of the infrastructure of the building. The budget total is CHF 935,370.- The financing will come from private sources, besides contributions from public organizations and semi-public foundations.

Donators to the organ building project will be given an Attestation of the Association of the Friends of the Notre Dame Basilica and may be granted tax deductions. According to the wishes of the most generous donors, their names will be engraved on a plaque placed on the instrument.

Donors may also show their support by financing individual organ pipes. The names of the donors will be engraved on the pipe(s) which they have financed. A plan of the pipes and of their costs is available here. Donations can be sent to the following bank account: